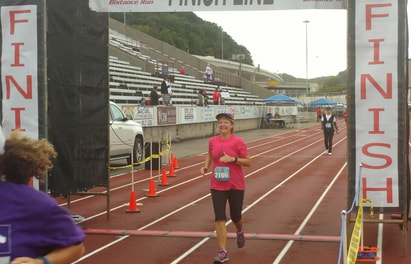 ​It was three years ago that I first heard of Genesis Running.  I had always wanted to run but told myself that I couldn’t.  I emailed Matt and told him my wish but that I was in my 60’s and I didn’t know that I would be able to do it.  Matt assured me that if I did the program I would be able to run and even do a 5k (another wish of mine).  Well, I didn’t believe in myself and I forgot all about it.

The following year I was out walking and I was thinking about how much I would like to be able to run but, again, believed I couldn't do it.    The company I work for does a lot of talking about “mind set” and I realized I needed to change mine.  I realized I couldn’t run because I had always told myself I couldn’t.  So, I asked myself “What can I do?”

When I first started running, I couldn’t even run one lap around the football field.  As discouraging as that was, that’s where I started.  Each time I was out I added some distance until finally I could run the entire lap.  Soon I was running a mile.  I knew then that I could actually do it and joined a Genesis class.

The class taught me so much and gave me confidence that I could be a runner.  I ran my first 5k a few days before my 64th birthday.  My main goal was to finish and to run the entire distance.  It was hard to wipe the smile off my face coming across the finish line.  I even ran another 5k later that year.

At the start of this year, I turned my sight to getting back out there and running.  However, in February, I learned I had breast cancer.  My running was put on the back burner.  I got out there when I could but it wasn’t like the previous year.  I decided to join a second class of Genesis and do the graduate class.  I was a little nervous about opting for the graduate class but knew I would get the help and encouragement I needed to do it.  My goals for the race this year were the same, to finish and to run the entire race.  There were days that after my run I did nothing else except rest.  My husband was so precious.  He knew how much it meant for me to be able to run and never once complained.  He was a jewel around the house.  My radiation treatments were over in June and by August I had added a new goal.  I wanted to beat my time from last year.  By doing the graduate class, my endurance increased and the interval training had increased my speed.  Come race day, I was ready.  I met all my goals and again, you couldn’t wipe the smile off my face coming across the finish line.  I have learned so much from the Genesis family during the last two years.  They are a family I want to always be a part of.
Proudly powered by Weebly