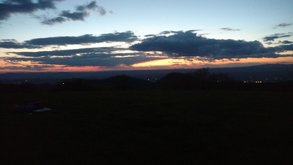 A view of the sunset from the finish line at Skylark. I saw the same scene in the final few miles on the Bluegrass Parkway
​I’ve heard tales from folks running hundred milers about the highs and lows that inevitably come in a race that long.  It almost sounded like a fairy tale to me that you can be low, even in a pit of despair, and then recover from it to feel great.  I’ve run enough longer races, although never a hundred miler, to have lows but once I’ve been that low I haven’t been able to get back to a high.

​Billed as the ultra race of champions UROC brings in some elite runners to compete for cash awards and has an open field for the rest of us. I ran UROC in 2014 at Copper Mountain, CO and it about killed me.  The elevation bounced mostly between 9000 and 12,000 feet and the high elevation coupled with a head cold body slammed this low altitude runner pretty hard. 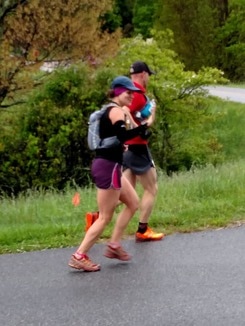 Easy start in the first 7 miles on road and gravel as we worked our way up to the top of the ridge. Running with Ashley early.
But this UROC in the Blue Ridge Mountains of Virginia would be on familiar terrain. In fact, as I ran along the race course most of the trail looked familiar although I’d never taken one step on it before.  It was even drier and less muddy than I’m accustom too despite the down pours the day before.

It’s described as a mix of terrains to give variety and it did. We had a little black top and gravel road along with some jeep trails but mostly the good ole single trac that trail runners love.

With an overall cut off time of 19.5 miles to complete the 63.5 miles I felt good about getting that done even coming in to the race with a lingering cold or allergy attack.  A sub 15 hour finish brought it’s own special black belt buckle.  I hoped for that mostly.  But after seeing the course profile of less than 8000 feet and ultrasignup projected finish time of 12:34 I was hopeful for more like 13 hours or so.

The first 6.8 miles were road and backroad with a net uphill.  Then we started and 11 mile rolling downhill section of single trac and about mile 14 I felt low and tired and knew I still had 49 miles to go.  It was about that point I saw the lead group come the opposite direction and they were about 7 miles ahead of me already that that point.  They were hammering.  About mile 15 we hit some nice rolling and smooth downhill single track and I was happy and high again. I thought a nice sub 15 hour finish was in the cards for the day.  Maybe even sub 14.

​Mile 18 was aid station 2 and then back up for 11 miles. It was a net uphill with some runnable sections but it was a slog and with 45 miles to go I wasn’t interested in using too much juice at that point.
​
I was kind of low again about mile 22-23 so I plugged some tunes and ate some food and worked my way out towards aid station 3 at mile 29 where I’d get to see the lovely and talented Ann Marie and Charlie.  But I wasn’t half way through and I expected to hit mile 29 at about 6:35 or so.  Now I thought 15 might not even be possible.

By the time I got to 29 my GPS read a total elevation gain of 6300 feet.  The whole course was supposed to be about 8000. That meant one of two things.  First, I only had about 1700 feet left for 34 miles OR, the elevation expectation was way off.  I'd come to find out that the elevation estimate was way off. I could run flats and downhills just fine. Uphills were tiring so I chose to walk and hike.
I came out of the woods and into the clearing at aid station 3 Ann Marie, Charlie, and my friend John (pacer John) were waiting on me. Charlie handed me a Mountain Dew, Ann Marie gave me my drop bag and John switched my bottles.  I was feeling good again.
I grabbed some aid station food, gave out some kisses and left on the blacktop of the Blue Ridge Parkway. I could run again and it was nice. I cruised (relative) on the mainly downhill section back to Skylark and the half way point.

Once again I got to see Ann Marie and Charlie, I grabbed my sunglasses, gave them sweaty hugs and kisses and picked up John who would run the rest of the way with me. Picking up John was definitely a lift and we ran together on the flats and downhills and walked most uphills. I felt especially good on the single trac. It was rocky at times which broke up a good rhythm but overall running felt fine.
From mile 50 on the lessons of the race were solidified.  Here are a few lessons learned (or re-learned).

First, you can come back.  I had more highs and lows in this race than I can remember. Seeing Ann Marie and Charlie were highs at 29, 34 and 40 and then knowing they’d be at the finish. Picking up my friend and pacer John at 34 was a high. But throughout the day I went through periods of feeling great and feeling down.  There were times of easy running and times that each step was a chore. I dry heaved at mile 52 and about mile 57. After the heaves I felt ok.  I could barely walk the 2.4 miles up the last big hill of the day coming in to Bald Knob and the aid station at mile 59 and right after it ran 85% of the final 4 miles to the finish line even running the last uphill to the finish.  Coming back can be done and it’s important to remind yourself that it can be done.  Good company, music, positive words and thoughts and the kind of running you like is all important.  I found that on nice single track with a slight downhill grade and I was happy and it lifted my spirits.  The uphills got me.

The second lesson I re-learned is that we’re made for each other. Two days after the race in my quiet time the devotion was based on Proverbs 27:17, “As iron sharpens iron, so a man sharpens the countenance of his friend.”  Countenance is defined as a person's face or facial expression. A second meaning is "support".  Can you tell a friend's countenance simply by looking at them ? Can you sense a friend’s mood?  It went on to say, ‘The Christian life is a pilgrimage. At times the road is difficult, and we get lonely.   Sometimes we may become discouraged and consider abandoning the journey. It is at such a times that God will place a friend alongside us. One of God’s most precious gifts to us is friends who encourage us to “keep going.”

In the interest of full disclosure at my low points I wanted to twist my ankle so I could quit. I thought I saw a snake and then I thought maybe it will bite me and I’ll have an excuse to drop. A snake bite is a pretty good excuse to drop, right?  I thought many times, why do I do this? Why isn’t a half marathon or even a marathon good enough for me?  The mind can go to some weirdly depressing places. It often lies to you but never in a good way.

John drove 4 hours to come and run 29 miles with me on Saturday and then left as soon as we were done to get back to his son the next morning. During the last 30 miles he complimented me when I was running well and even when I was just plain moving well. He knew when I felt miserable, like when I was dry heaving, or on a slow trudge up the last big climb.  I knew he understood and rather than pushing me he just came quietly along with me step for step.  In the last 4 miles when he knew I could run, although it wasn't easy, he pushed me.  He also knew 15 hours was very close and I needed a push to make it.  We spent a lot of time talking during the  7 hours together and some times we were quiet.

As I thought about it later I realized that’s why we have friends. When I felt bad he understood, commiserated and encouraged. When I felt good he told me good job. No one likes to suffer alone.  And the celebration of the good things in life is best done with the ones you love.  That last march up to mile 59 was buffered by John.  And I was glad he could see me running the majority of the last 4 miles of the 63 mile race. I felt like a little kid looking for affirmation or approval.  We’re made to share the good and the bad with our friends.

I’m also blessed beyond measure to have that in the rest of my life with Ann Marie. She loves and encourages when it's needed and somehow knows when I need it.   We’ve recently seen two marriages fall apart without any warning and this has encouraged many discussions between us.  After celebrating our 20th anniversary just a few weeks ago it has brought us even closer and increased our resolve to guard our hearts and our marriage vows.  We’re made for each other and I love that.

Running long distance brings an amazing emotional catharsis and introspection.  I love the lessons that running teaches me even if I have to learn some of them more than once.

So by the numbers 63.5 miles in 14:58:35 for an average pace of about 14:09 and 11,300 feet of elevation gain.  According to the runsignup.com there were 107 registered, 98 started, 57 finished and I was 30th or 29th depending on the list.  My watched died after 53 miles but here’s the live tracking with splits. I’ve notice the placing is a little skewed in the middle. After the 7th mile I passed runners but wasn't passed again.

Here’s my data for the first 53 miles or so.

A black belt buckle was awarded to all sub 15 hour finishers and I was the last finisher under 15 hours.  It also meant I was the first to be awarded my buckle in the ceremony to follow.

UROC was a great race on awesome trails surrounded by some cool folks that are nice to be around.  The aid stations were well done, the volunteers were always helpful and smiling and the overall organization was solid. I have no complaints and enjoyed it from top to bottom.   I'd run it again any time and hope I get the chance. 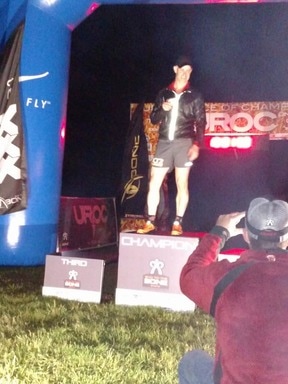 Last in, first out for the black belt buckle.
A few pictures to help tell the story.  I regret that I had no pictures with Ann Marie. 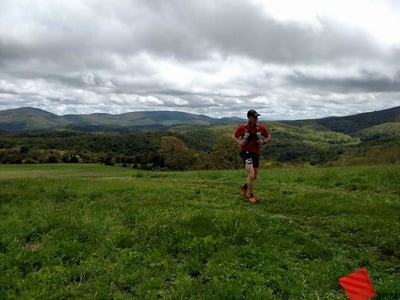 With the Blue Ridge mountains behind me around mile 33. 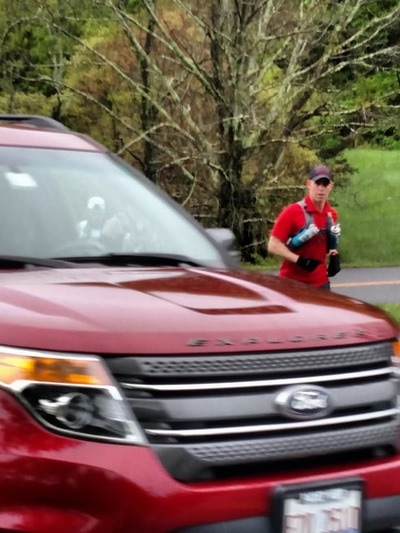 Early in the race. I think I saw a Squatch. 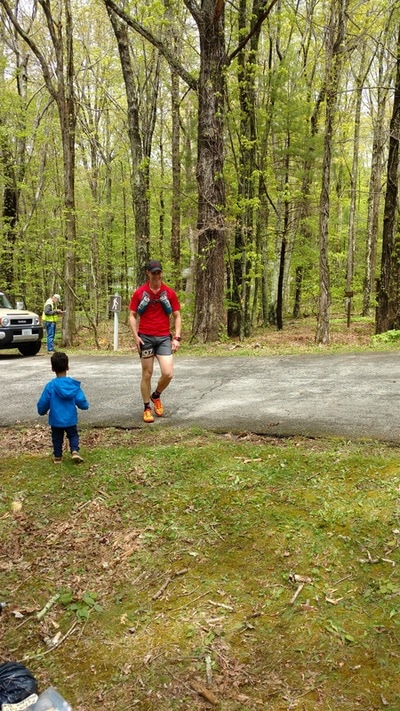 Coming in to the aid station at mile 29 to see my crew. 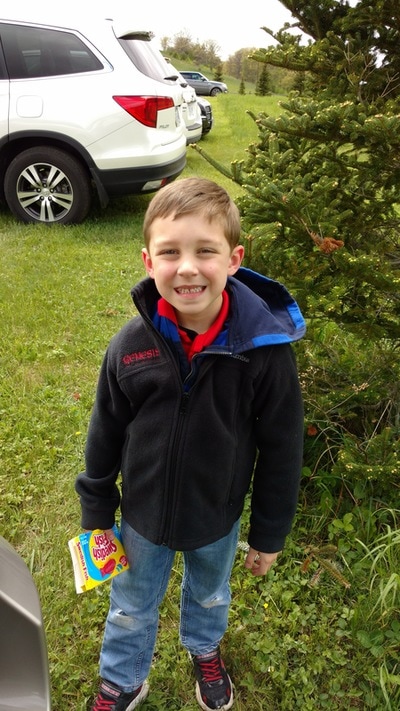 My boy Charlie is always a high. 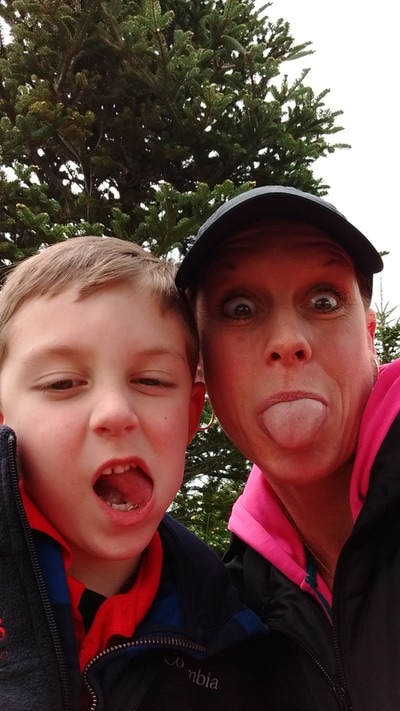 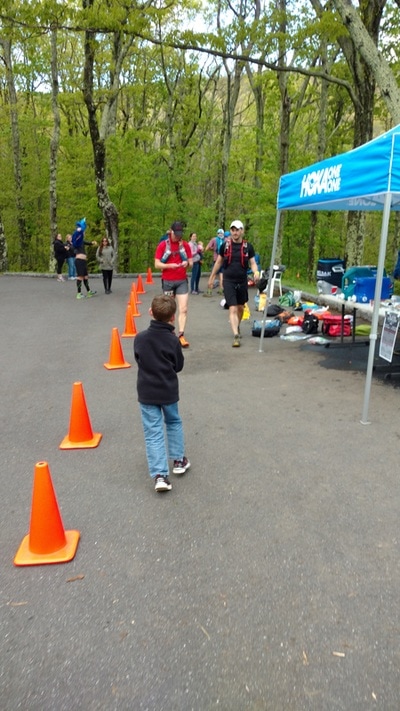 Mile 40 with my pacer John and my crew chief Charlie. 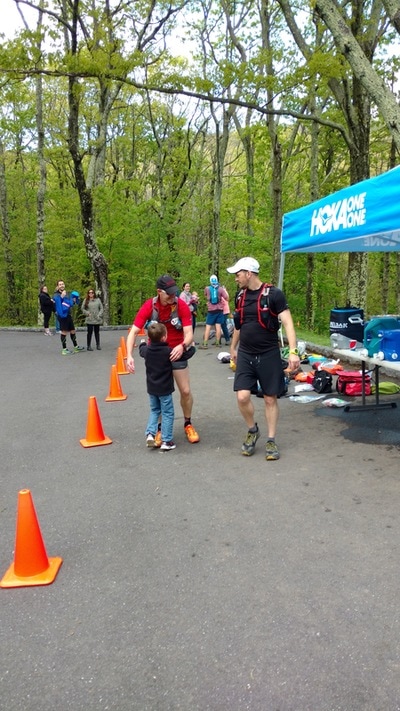 A high of the day. About mile 40 with hugs from Charlie and then nice single trac downhill. 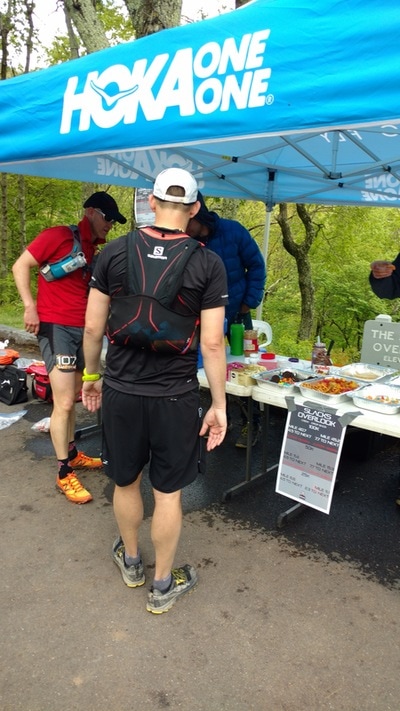 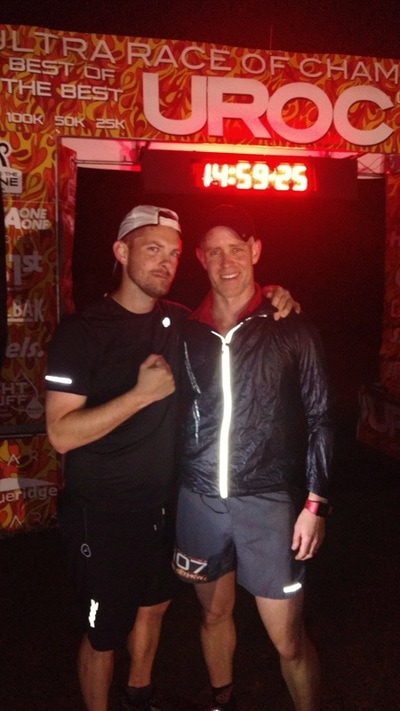 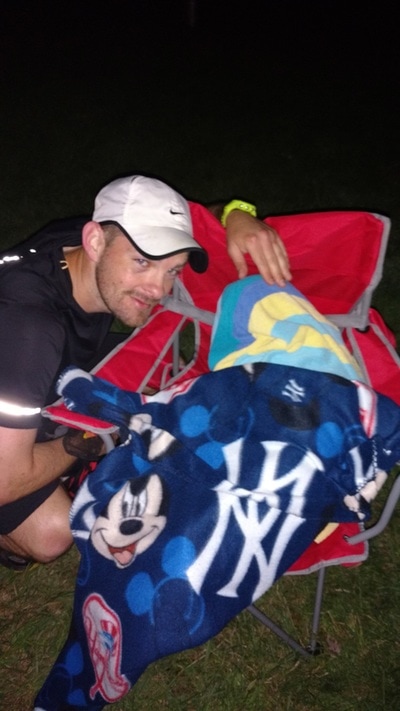 Charlie was carnage by the end of the day but he and John became fast friends. 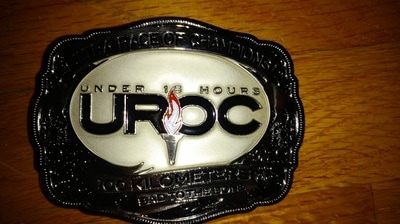 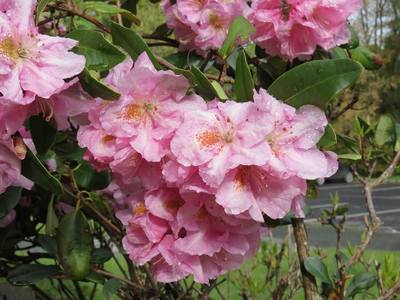 Scene from the course. 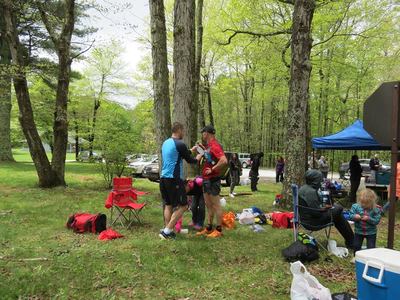 Fresh bottles at mile 29 from my crew. 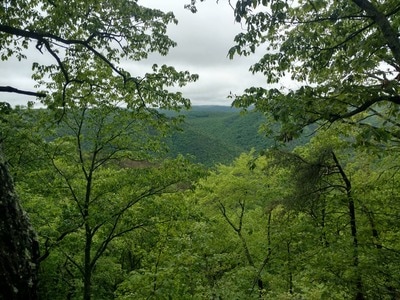 Scenes from the course. 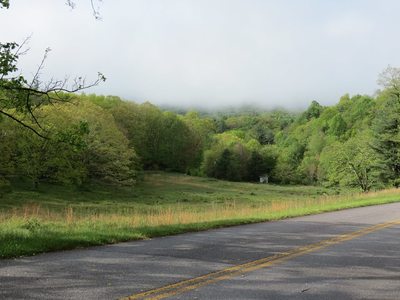 We had a layer of fog most of the morning and were in and above it mostly. 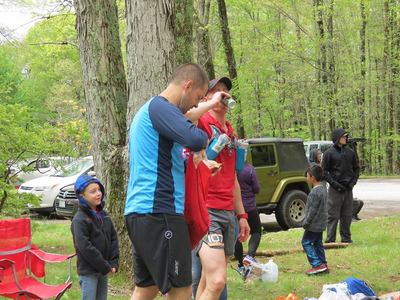 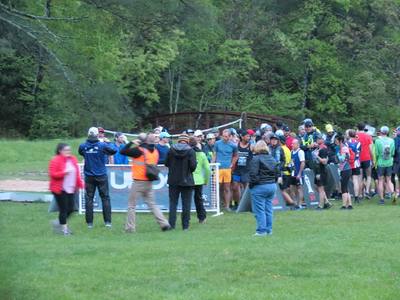 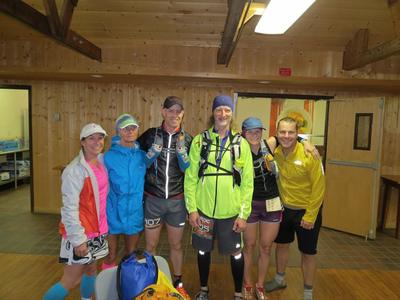 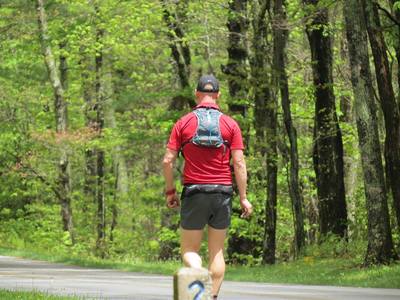 Leaving AS 3 at mile 29 downing some calories and getting ready for some blacktop and gravel. 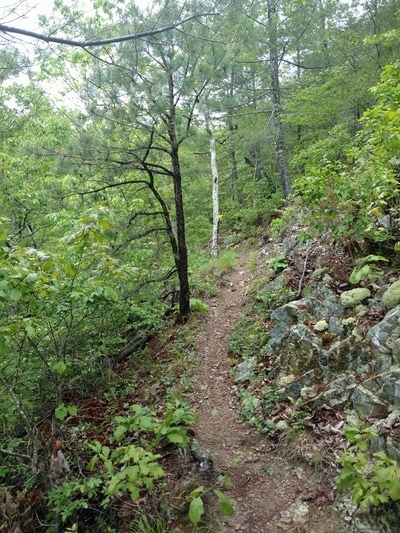 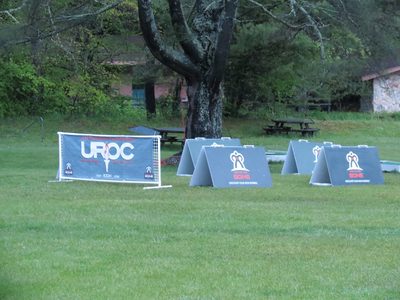 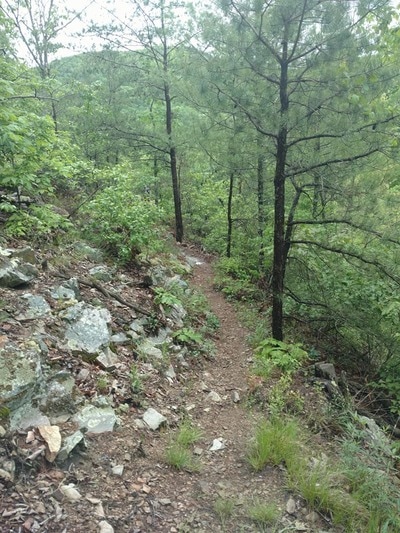 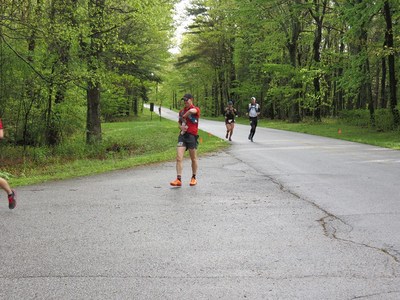 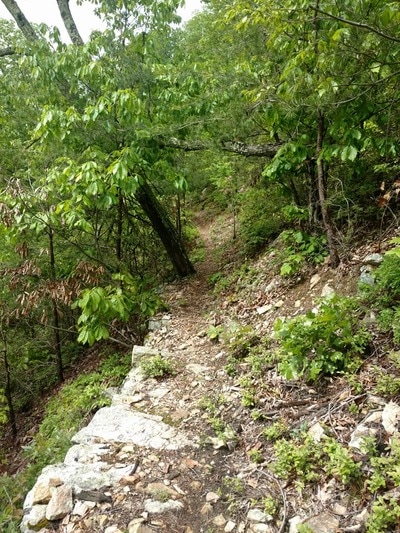 More scenes from the trail. 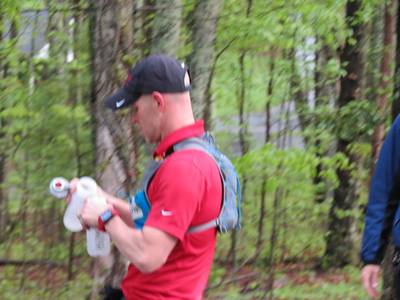 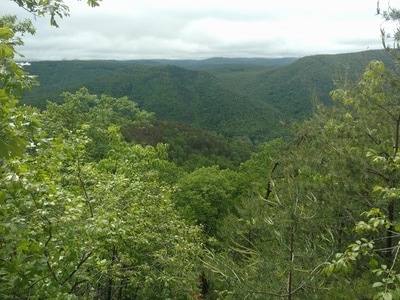 Awesome mountain view from the trail. 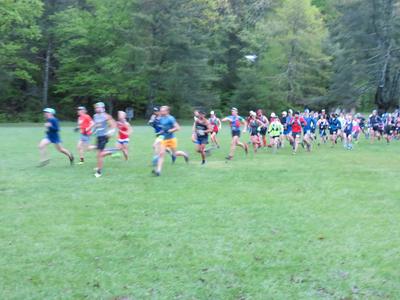 Even in a 100k there's a ton of fast starts.
Proudly powered by Weebly