It couldn't have gone any better. I would even say that I overachieved on this day.  To her credit, the lovely and talented Ann Marie said several times leading up to the race that I would be under 24 hours.  She wasn't exactly right but she was pretty darn close and it really surprised me.

How do you report on a 100 mile race?  Beats me, it’s my first time so I'll try to hit some highlights and some observations.

Rim to River 100 is West Virginia's first 100 mile race.  Billed as a 100 mile tour of the highlights of the New River Gorge area it did not disappoint.  Over the course of the day we traveled the trails in and out of the gorge 4 different times with sweeping views of the gorge and traced the steps of coal miners by the remnants of the coal operations from years ago.  I had it in my mind to try this distance again this year and this race was the perfect choice. It's my second attempt at 100 miles, the last being 2016 when I dropped at 50 miles. I've regretted it ever since.  If you want a little history the report is here. ​ 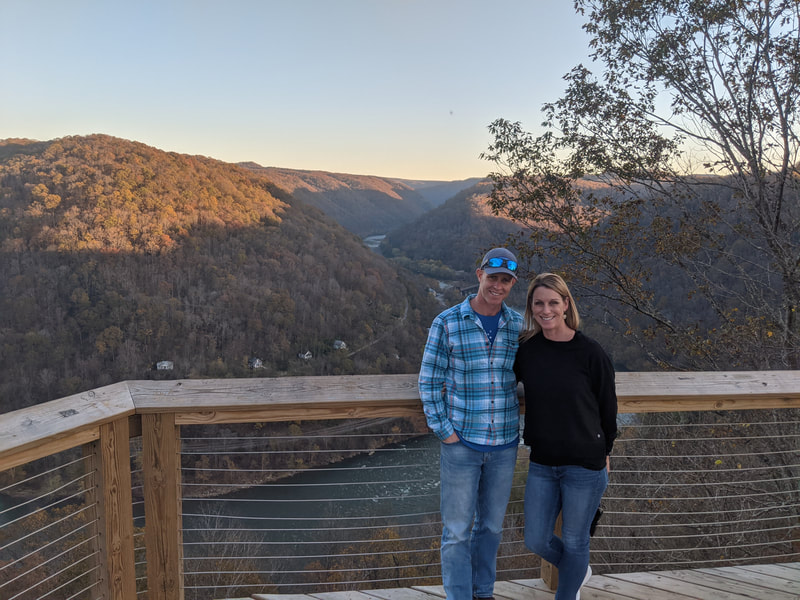 From Concho Rim Aid Station the night before.

Chief of Logisitics, Aaron joins us. 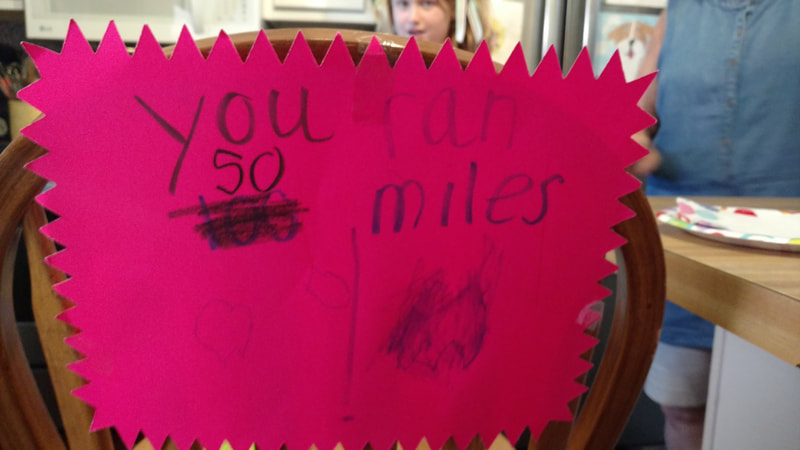 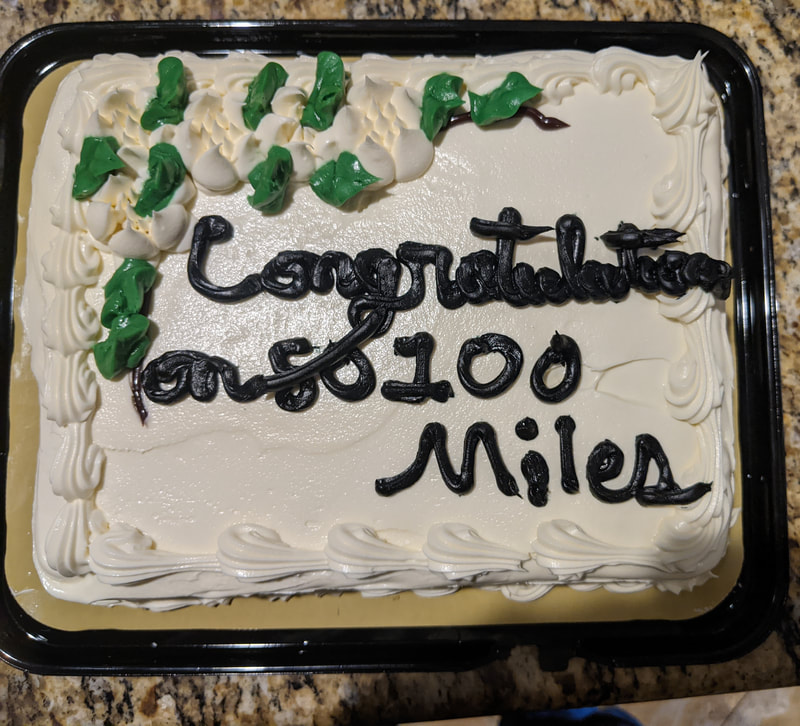 Cake for my Rim to River party. 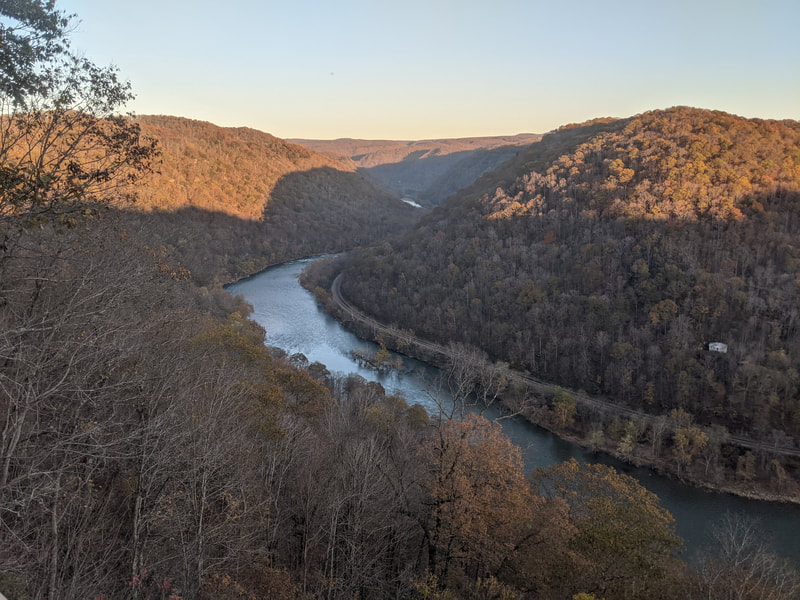 View of the New River from the Rim. 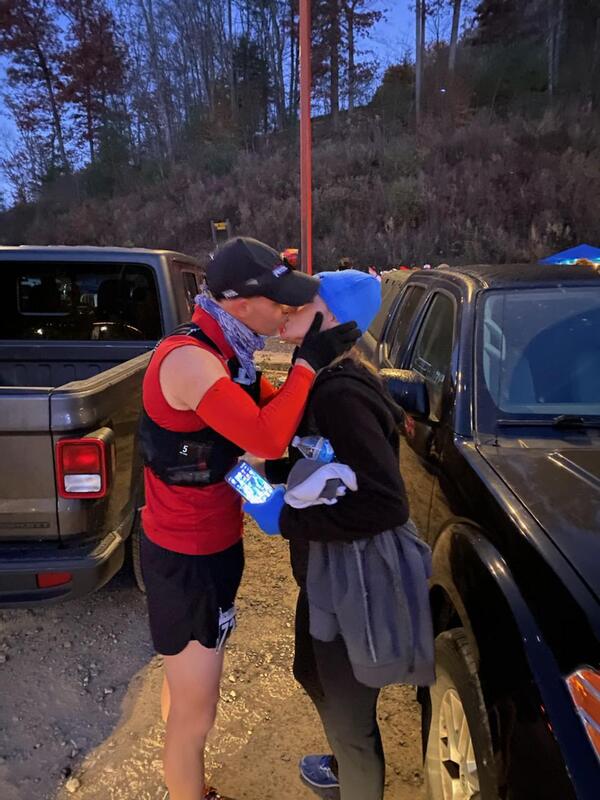 One last kiss just in case I don't make it back.
My small but powerful crew was made up of Cody, Aaron and Ann Marie. They are the dream team and we called ourselves Team Purge and Move On.  We forecasted plenty of purging but the moving on would have to follow.

No offense to everyone else out there reading this, I love you, but these three were perfect for this task.  Ann Marie has suffered through the last 4 years of me whining over my dnf at my first hundred. She was the enforcer for the no retreat, no surrender objective of this race. She was crew chief and would run the last 4.5 mile to the finish line with me. ​ 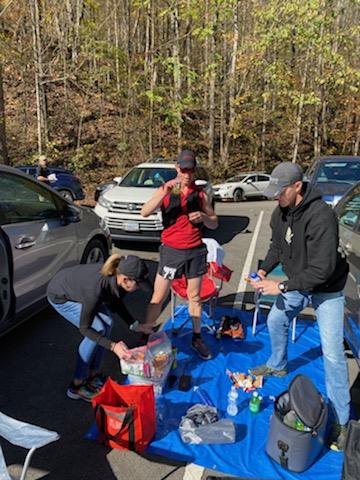 Cunard aid station at mile 26, the first time I got to see them. Wouldn't be back here until mile 82. 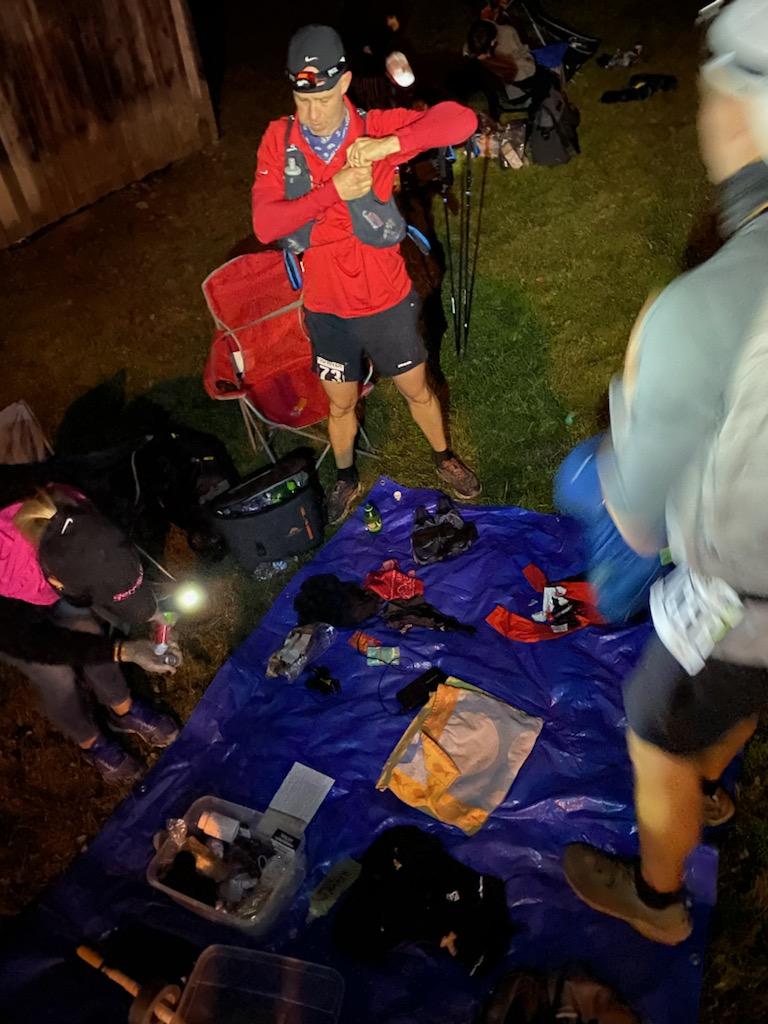 The Purge and Move On crew was prepared each time. 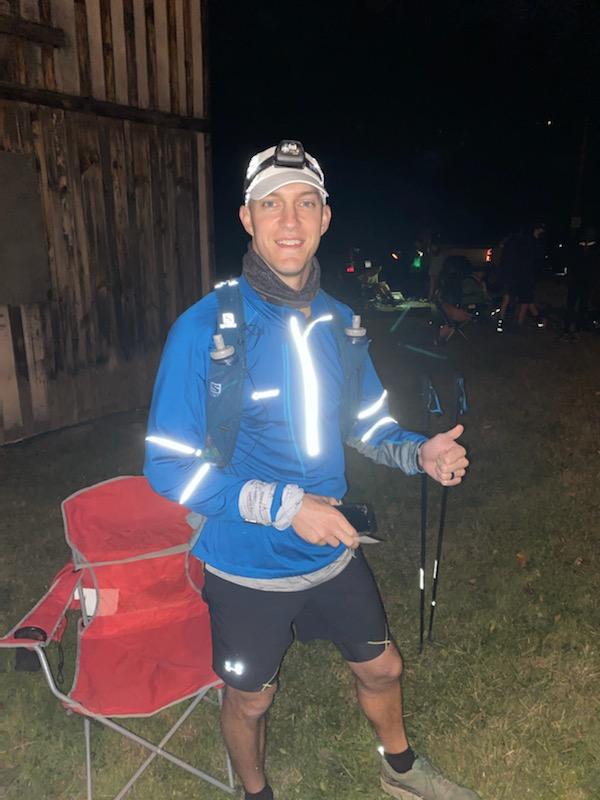 Cody ready and waiting for pacing duties.
​Cody was on deck for crew and to kick off the pacing duties at mile 55 and carry me to 82 where Aaron would take over and go from 82 to 95.5.  It was the perfect segment for each of them and they executed their role with excellence.   I couldn’t have done it without them.  Cody was the head of positive pessimism for the day and the overall positivity champ.  He had done many training runs with me including night time runs, a 12 hour adventure and a little course recon. He took his role seriously and was prepared.  In the end the main thanks Cody got was getting farted on every 2 minutes for 27 miles.  It was quite the scene.

Aaron was the head of logistics, the perfect role for an engineer. He studied course maps and knew it better than I did and had directions to each crew location.  He also was turning in some two a days, night runs and and over the years he and I have logged many miles together. He also upped his gear game by investing in a new pack and was using it for only the second time. When we left Cunard at mile 82 I surveyed the pristine new pack reflecting in the light of my headlamp, that was nice.... I then promptly shoved all of my trash in it including some cold chicken broth.  It will wash out.

At different times throughout the night we'd pause and marvel at the star show going on above us.  The contrast of the pitch black dark of the gorge and the blanket of stars above was stunning.  Many times throughout the day I caught myself looking head to sunset.  Night time running on the trails is near the top of my favorite things to do.  It was an awesome reminder of the glory of God's creation. 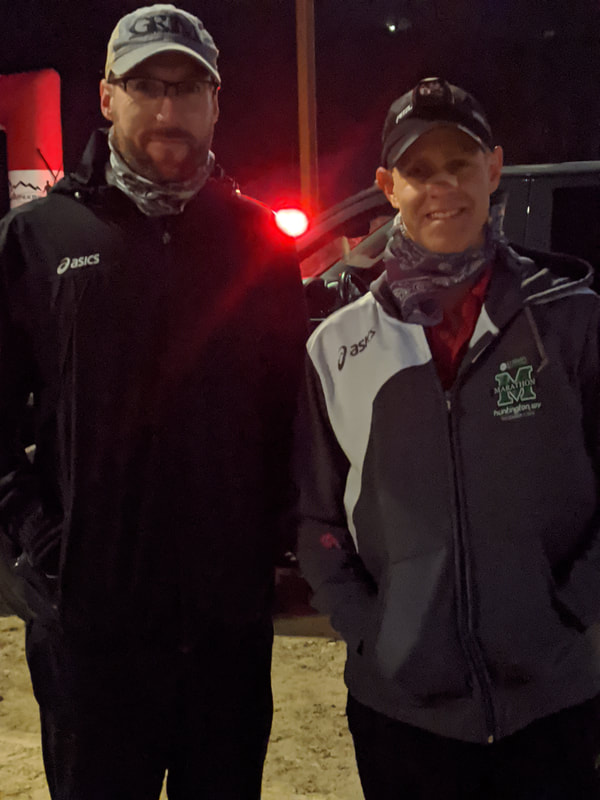 Aaron's day started at 5:30 am on Saturday and finished... never. 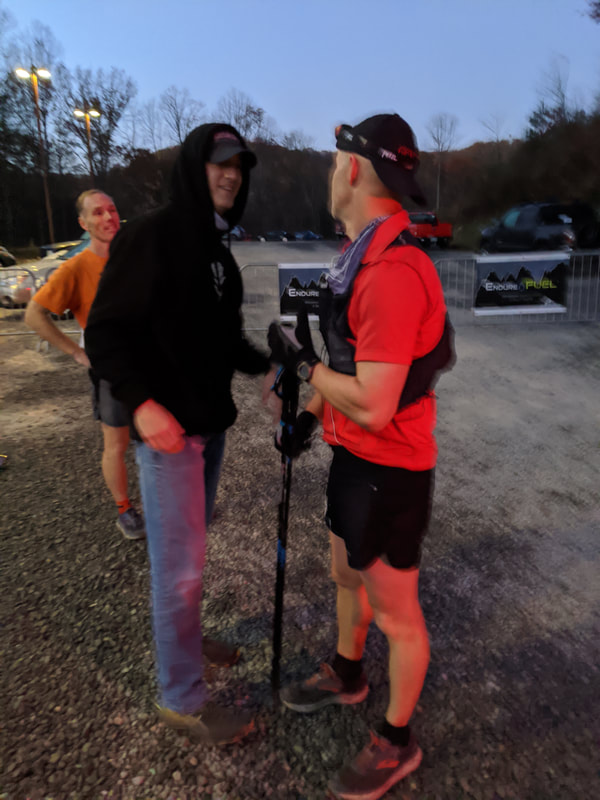 After running from 7pm until 2 am Cody still made it to the finish line. 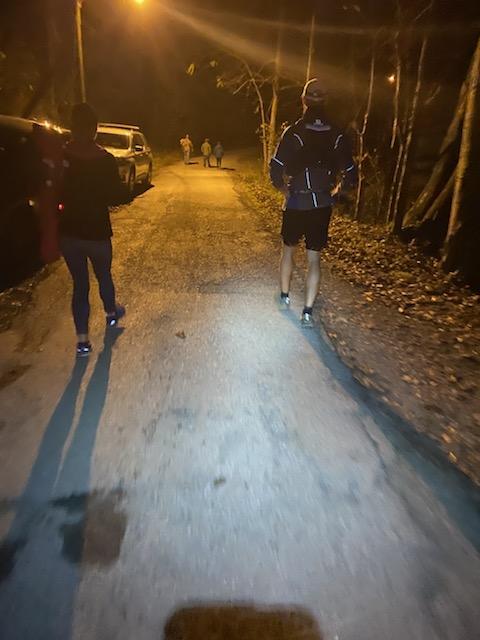 Crew making it to remote locations in the dark.
​Earlier in the day I shared some miles with Logar, Ryan, Katie, Meg and Mark. We ran together at different times and shared stories, laughs, experiences and enjoyed the beauty of the day. Man o man, there’s nothing like the ultra community; easy going, encouraging, upbeat, and overall some of the best folks on the planet to be around.  In West Virginia we have some of the best.

For the day nothing went wrong.  Perfect weather, good energy, no wrong turns or misdirections, no clothing or shoe mishaps, and my stomach behaved all day.  I got sore and tired and every toe blistered but that’s expected.  To overachieve or even meet the best possible scenarios everything has to go right and everything went right. 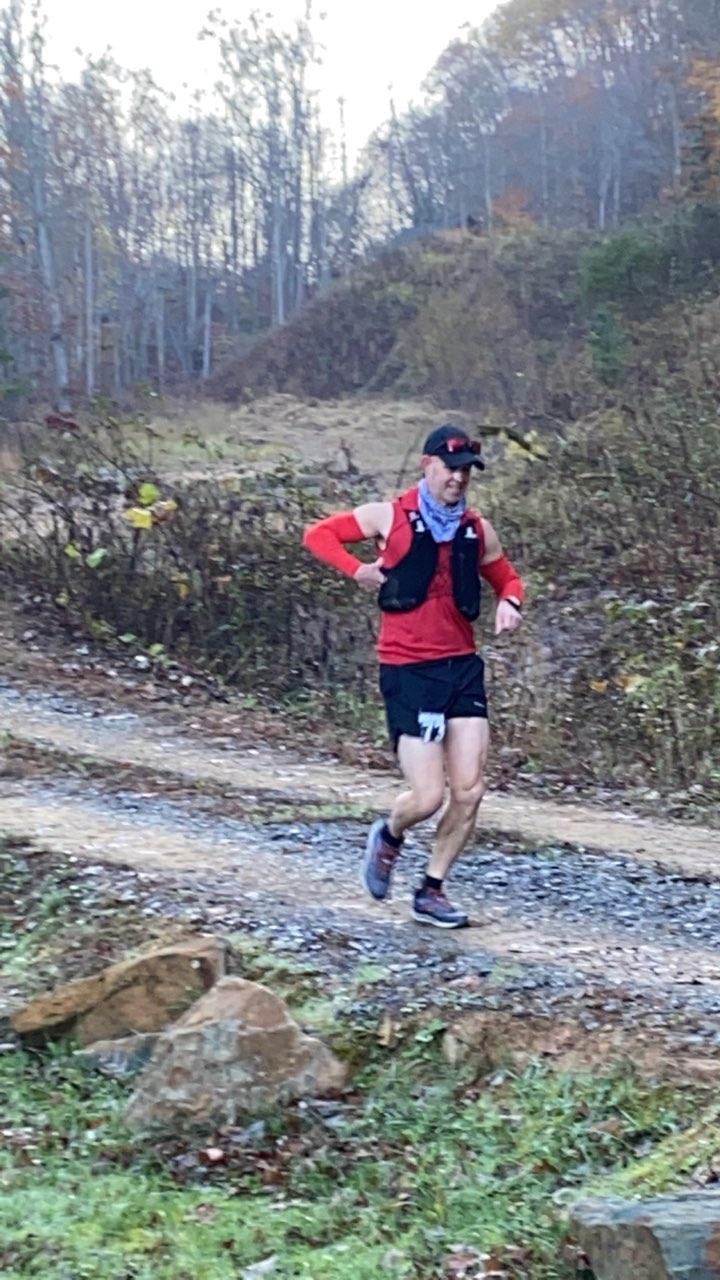 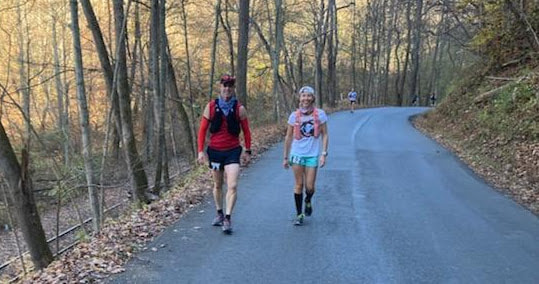 Coming out of Thurmond with Katie and Meg is close behind. 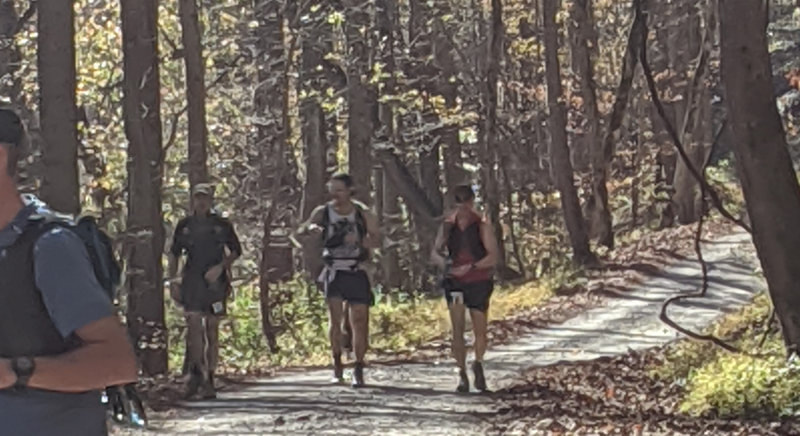 With Logar and Ryan coming in to Cunard.

​I was ahead of schedule at each aid station and at the turnaround at mile 55. The mission for the day was to go aid station to aid station and that’s all.  At the start my goal was to empty my water bottles by Concho Rim AS at mile 7.5 and then refill.  I would eat something every 40 minutes and empty my water bottles between each aid station. After I left an aid station I’d fix my mind on the next one.  This hundred was going to take care of itself one aid station at a time. Avoiding math on the trail is hard for me. You know, I have x miles to go and at a 14:00 minute pace it will take me x time. But, somewhere along the way I realized that 24 hours was not out of the question.  Leading up to the race I was thinking up to 28 hours but was prepared to do whatever it took to finish up to 32 hours.  Still the recurring thought was, if I can hold this, and I’m not convinced I can, I’m looking at being real close to 24 hours.

I said after my dnf in 2016 I’d never try 100 again without a pacer.  I happened to have 3 this time and I couldn’t have and wouldn’t have done it without them. Cody took the long shift of 27 miles going from about 7:00 pm until just before 2:00 am. Aaron went the next 13 from 2am until about 5:15 and Ann Marie closed it out with 4.5 miles until we finished about 6:30. Pacers don’t really set the pace.  They mostly run behind and get farted on,  steer you away from cliffs and wrong turns and think for you when you are sleep deprived and exhausted.

My pacers also happen to be three of my favorite people so just having them with me for the endeavor was all I needed. They encouraged me, entertained me, and let me talk or be quiet when I needed it. Each of them spent about 24 hours awake, just like I had, but often waiting for hours just to assist me for a few minutes at three aid stations.  Somehow, they seemed to enjoy it as much as I did. It was a blessing to have them with me.

When you do these long events you have to plan to for things not to go as planned.  To quote Mike Tyson, "Everyone has a plan until they getting punched in the mouth."  Somehow, I didn't get punched in the mouth. It was hard, yes, for sure.  I hurt, yes, for sure. I was tired and tired of moving, for sure.  But that was expected.  The grace of God made it all work for me. I'm so thankful.  In my pride and arrogance I could look back and say it's the years of training, the months of preparation for this specific event, the night runs, and long runs, and trial and error with food, and gear research and....... But that's a self driven result. In the words of Tim Keller, and I paraphrase, "Do you think it's you? Do you think you did this?  You could have been born on a mountain in Tibet in the 13th century instead of in America and in this age."  The point is, I'm thankful for God's love and grace on me and in my life.  This race and every aspect of it was a gift.  If it had turned out different, and I've had plenty that have, it would still be a gift.

The finish time was 24:03 and I couldn't be more pleased. 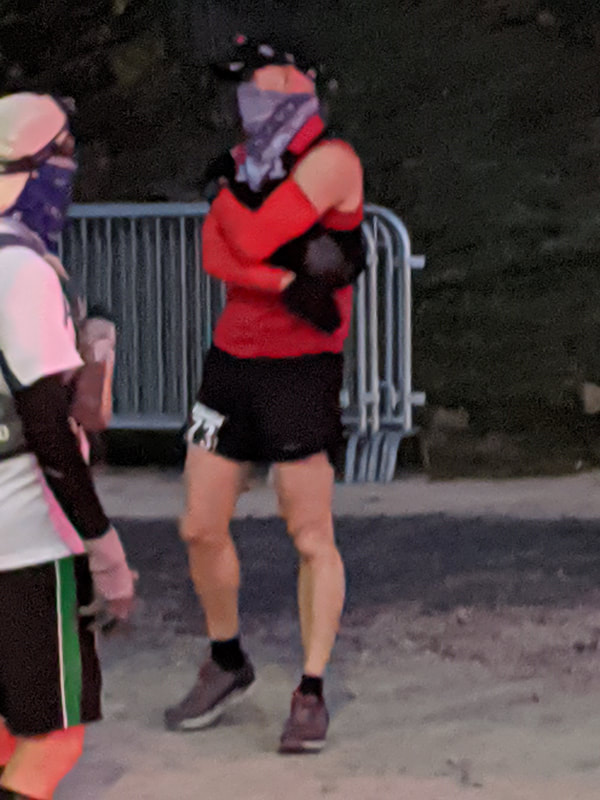 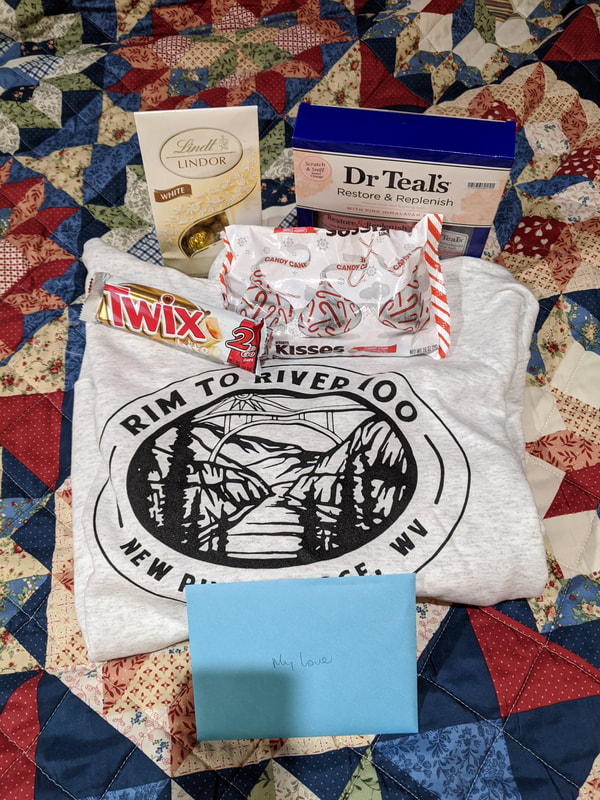 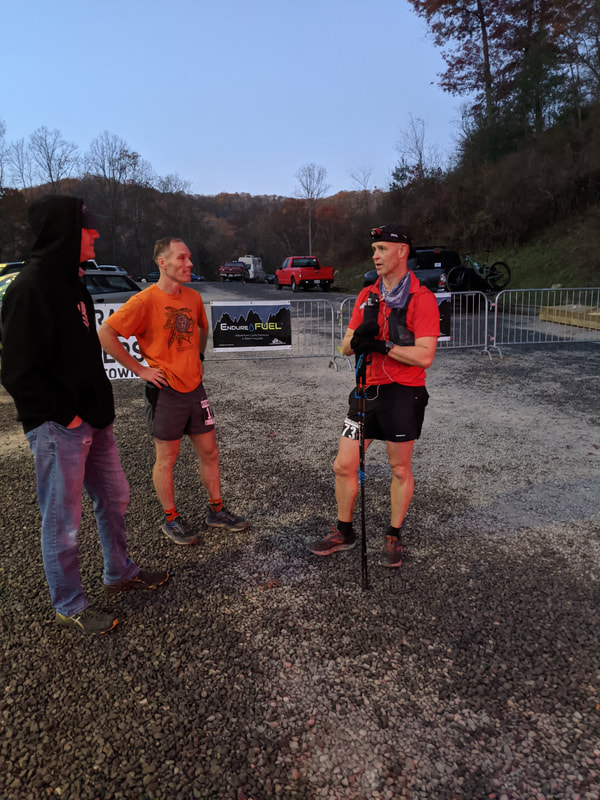 Finish line with Bob and Cody. Bob had just finished and was waiting on me. 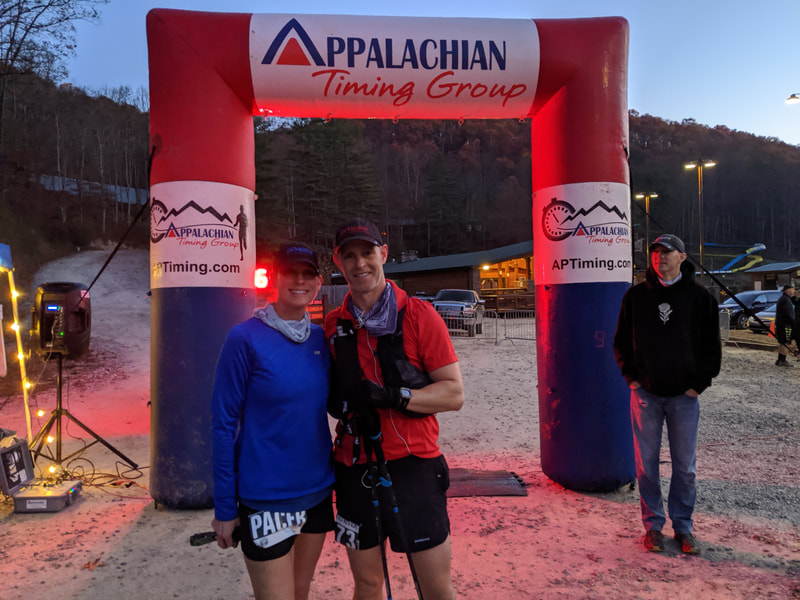 My crew chief and my love. 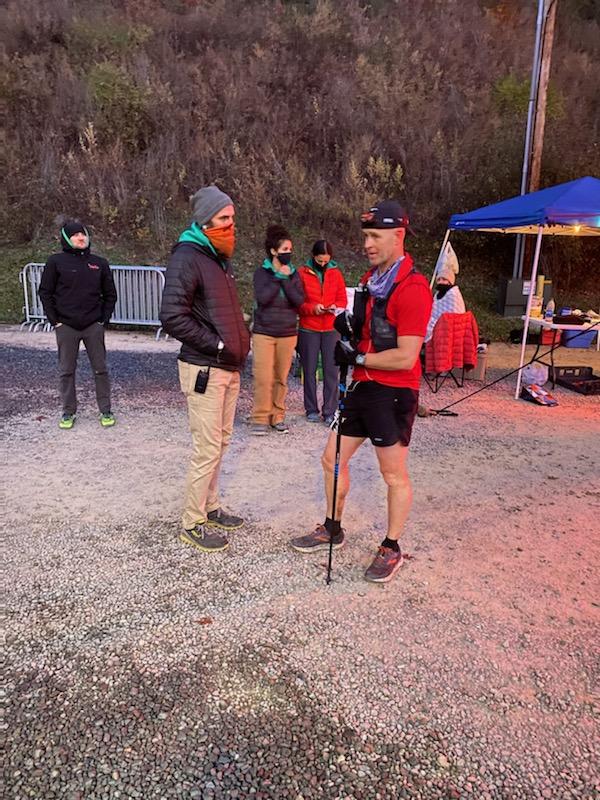 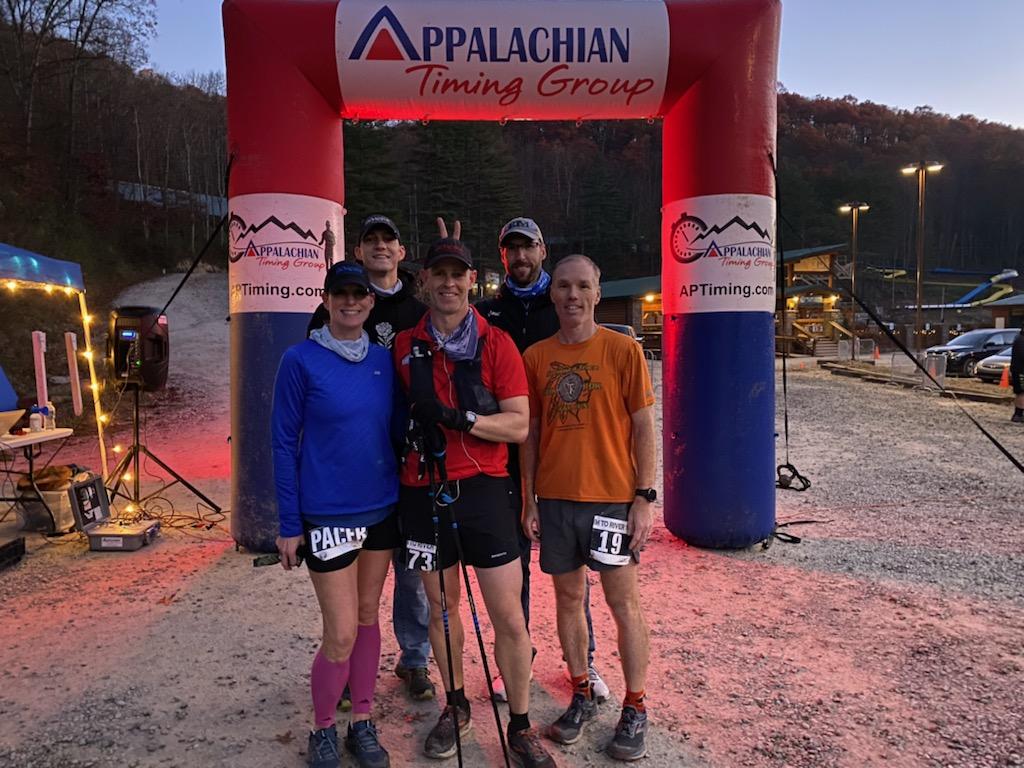 Team Purge and Move On. Bob had his share of purging and moving on. 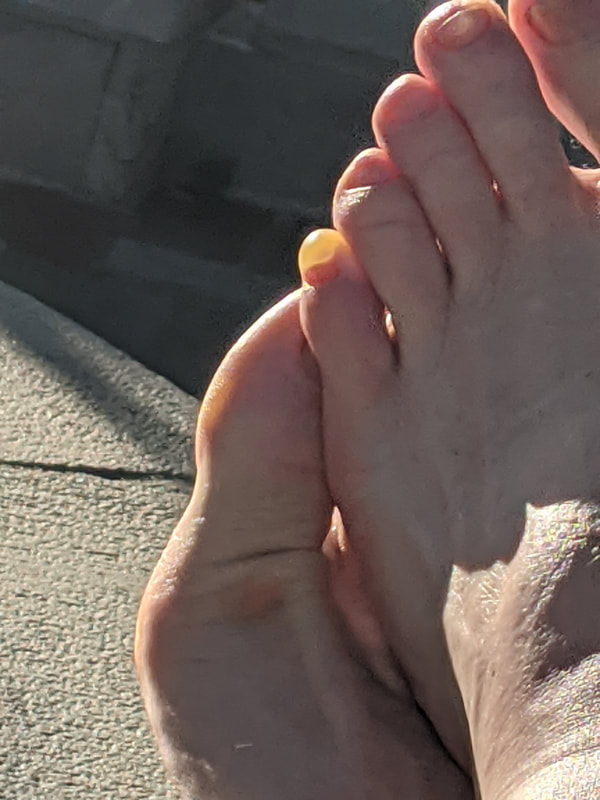 My pinky toe and a blister hat. 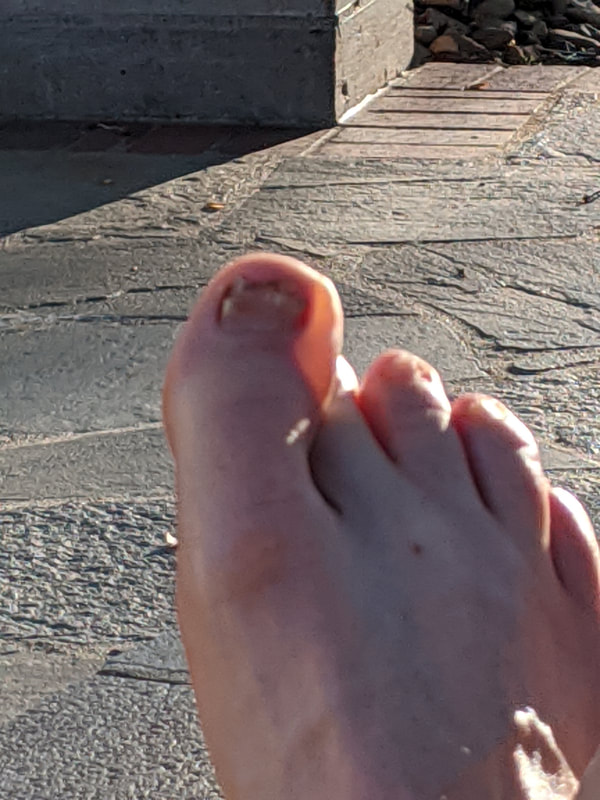 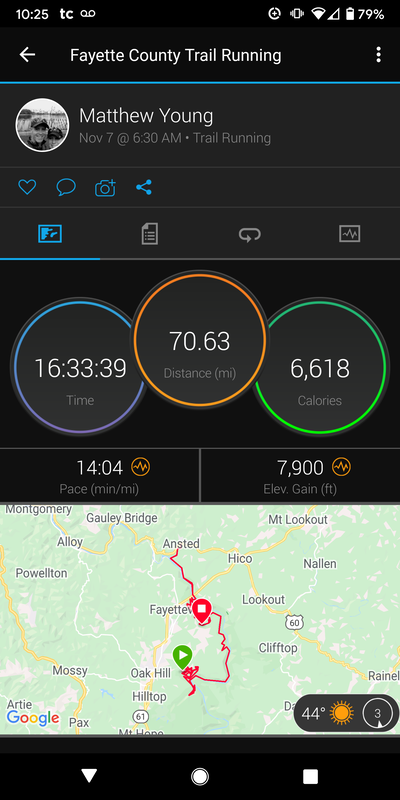 The gps battery made it over 70 miles. 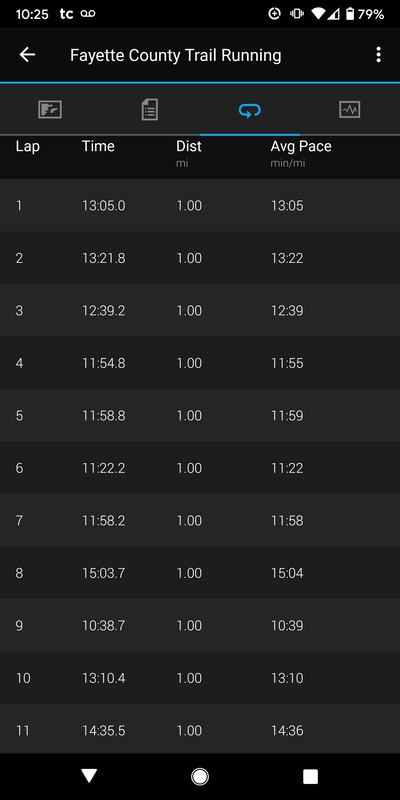 Some splits for the day. Pretty steady. 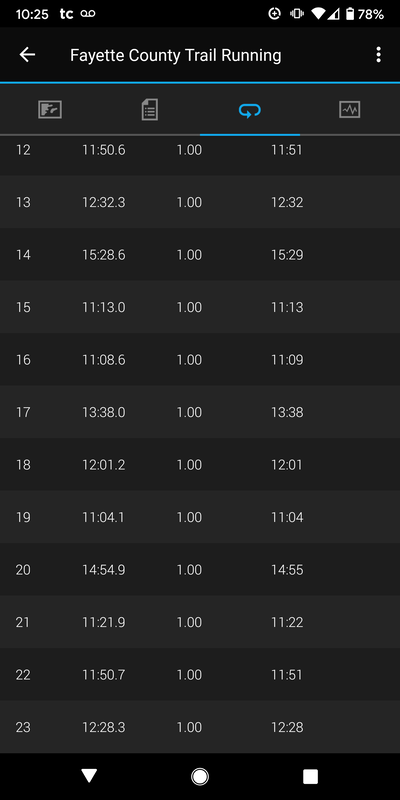 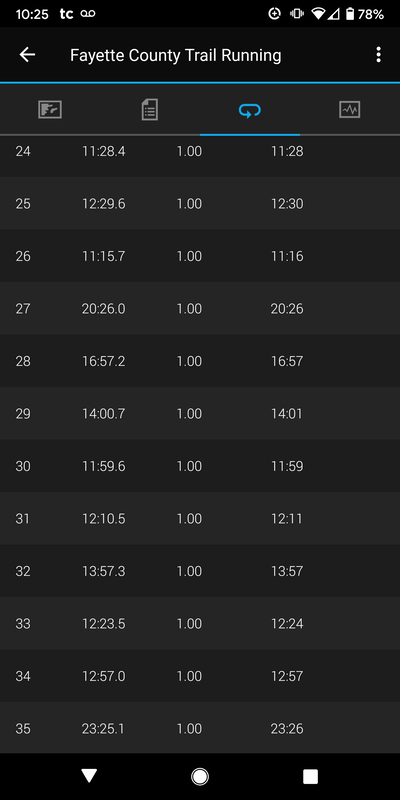 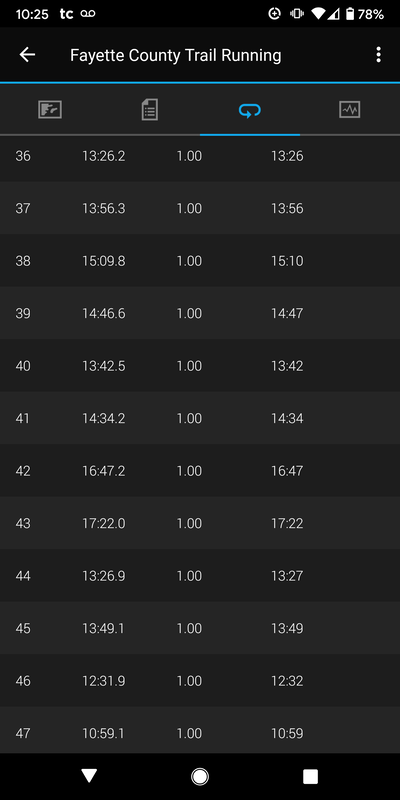 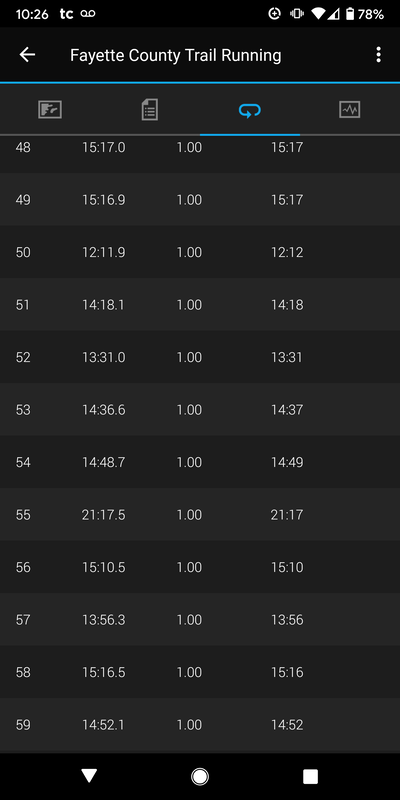 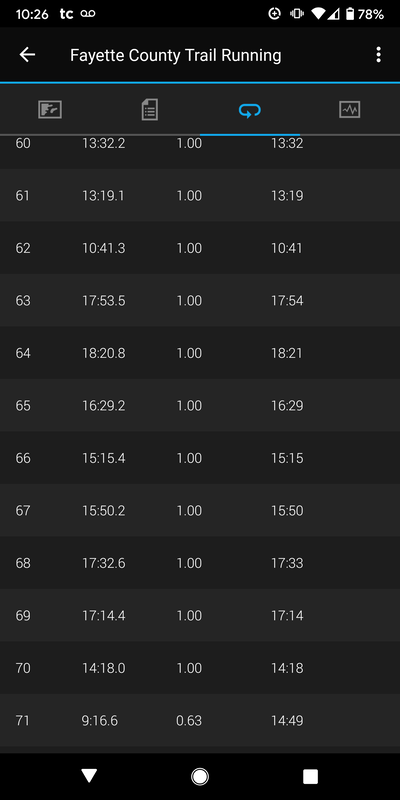