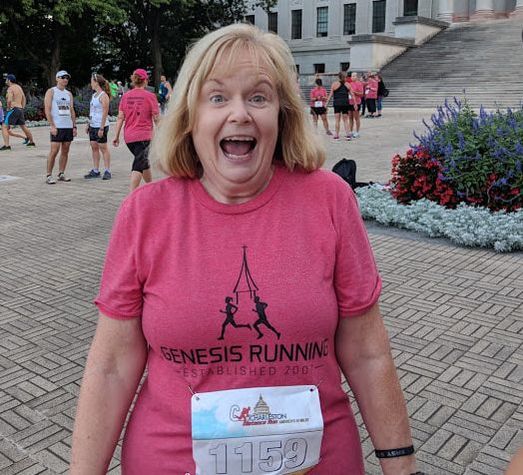 The last nine weeks have meant a great deal to me, mentally, physically, spiritually, and socially.

Socially, it has meant sharing the journey with my two Christian friends who started with me, as well as making new friends and discovering each week a new admiration for both of my coaches for the time and effort put in to this program.  Assistant coaches Mac and Deb were also very devoted to seeing us all through this process.

Spiritually, It was like God led me right to Genesis Running.  The weekly scriptures were uplifting and helped me personally grow in faith and trust in my Creator.

Mentally, I lost my mother in May of 2017 and my brother was diagnosed with terminal cancer in November that same year and passed on March 9th of this year.  I literally used the running process as a form of grieving and finding the strength to go on living not merely existing but feeling myself growing stronger and more capable of facing life with no immediate family members remaining.  I will run the race Saturday in honor of my brother as he was the first person to introduce me to the joys of running when I was just a young girl around 19 years old.

Finally, physically, I was diagnosed in 2013 with an inner ear problem and slight residual balance issue and was told I most likely would never be able to run again.  When I cross that finish line Saturday, it will be my first official 5k since 2012, proving once again to me that God is in control and if we trust Him and follow Him, he truly can restore many of the things we once lost.

Yes, Genesis Running is about running, but it is also about living life more abundantly.

One final thing, about three weeks into Genesis training, I was cleaning out the basement of my brother's house that he left to me.  I picked up an old box seemingly filled with junk and looked quickly through it and headed towards the dumpster to pitch it.  As I headed out into the sunlight towards the dumpster, I saw something sparkling in the bottom of the box.  When I pulled it out, it was a commemorative silver dollar coin inscribed with the words, "Charleston Distance Run, 15th Anniversary, 1987" with an imprint of a runner on the coin.  Could it possibly be my brother had ran the exact same race back in 1987?

He was a runner in high school and in his 20s so it was very possible that he ran the Charleston Distance Run.  I was SO excited and encouraged.  I couldn't find his name on the race results for the 15-miler in 1987 and they didn't have a results page for the 5k that year, so I will never know for sure but I still took it as a reinforcement that the CDR was meant to be my come-back race.  That's when I decided to run it in his honor.   God works in mysterious ways and I cannot help but hope and believe that God's hand is on me through this journey and my brother's love and encouragement are surrounding me.)